Altamira Instruments has extensive experience in the design and construction of BenchCAT reactors for biofuel applications. The study of biofuel processes has become a significant area of research over the past few years. Although it is still very much at the research stage, significant progress is being made so that some form of commercial process is likely in the near future.  Biofuel is a catch-all term for any fuel not derived from fossil fuels. In its simplest form it can  be ethanol derived from sugar cane or corn via fermentation. Alcohols, however, do not have the energy content of more conventional fossil fuels like gasoline or diesel oil and current efforts are aimed at developing biofuels that are indeed similar to gasoline or diesel.  Biofuels have multiple sources, such as municipal waste, wood chips, soybeans, or algae. Depending on the source, a different process and thus different reactor design and conditions are used. We look here at three processes for the production of biofuels in which Altamira Instruments has participated with a BenchCAT reactor design and construction. 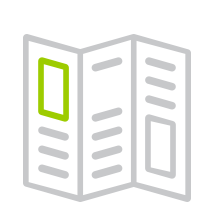 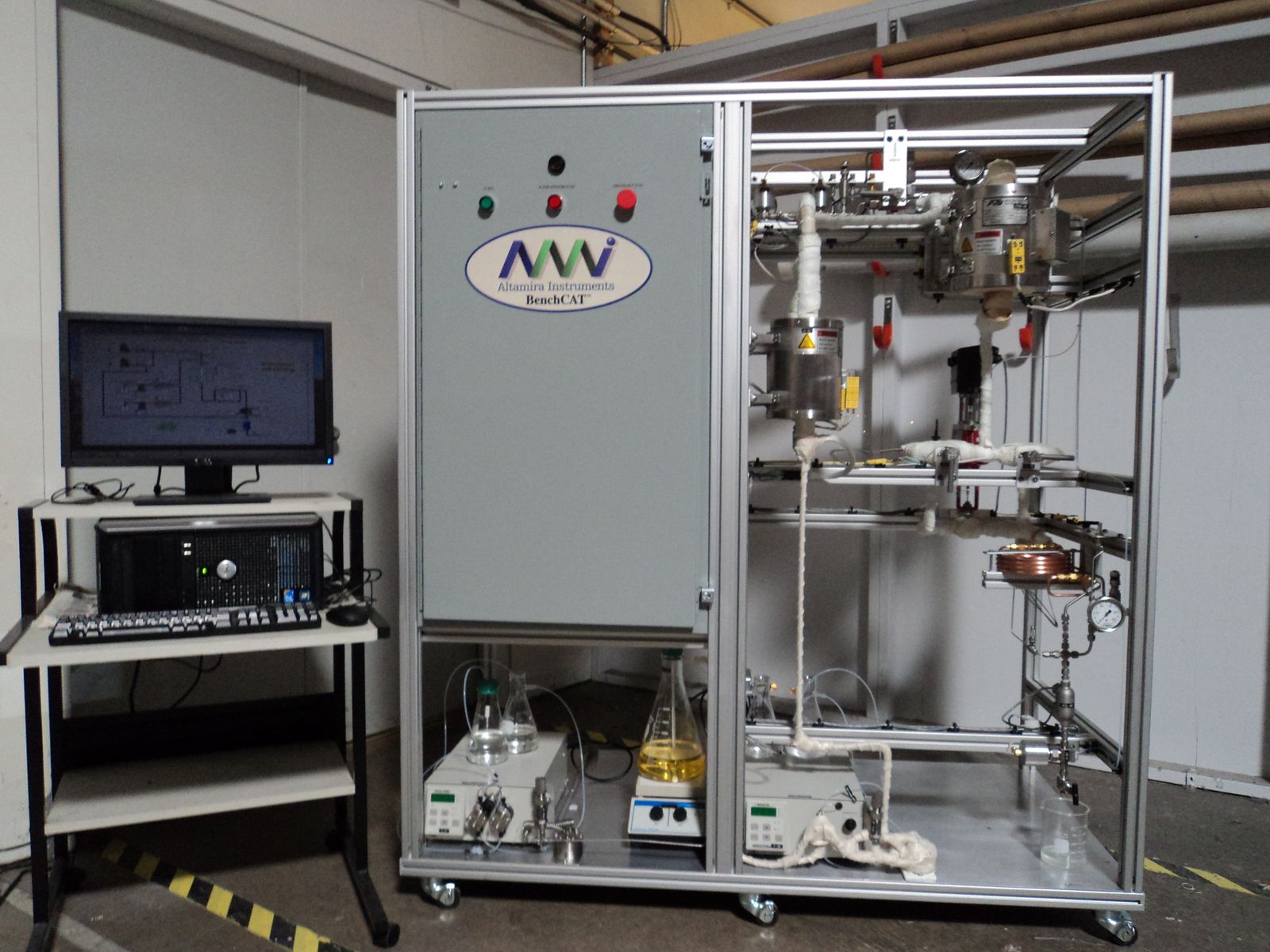 1. Via Gasification of Biomass

Perhaps the oldest and best known process for making synthetic fuels is the Fischer-Tropsch (F-T) process¹. The original process was developed in the 1920s and 1930s and was actually commercialized in Germany by the late 1930s. The F-T process was used to produce fuel for both automobiles and military equipment.

The F-T process can be used to produce biofuels from virtually any kind of carbon-containing biomass, such as municipal waste, wood chips, celluloid grasses, etc. The first step in such a process is the gasification of the biomass to form Syngas, H2 + CO. The Syngas is then used for the F-T process using a catalyst, typically either iron or cobalt,
to produce hydrocarbons.  By controlling several process parameters – such as temperature, pressure, ratio of H2 to
CO – the product  composition can be controlled.   Products  ranging from light hydrocarbons  to heavy waxes are
possible using the F-T process.

Figure 1 depicts a typical F-T BenchCAT reactor designed by Altamira. The four gases include hydrogen and carbon monoxide (Syngas), nitrogen as a diluent, and argon used as an internal standard for analysis. This F-T reactor was designed for operation to 400°C and 1500 psig pressure, although typical operating temperatures and pressures are lower. Three separators are used. The first one, kept at about 150°C, is used to collect the heavier products such as waxes. The second is kept at about 80°C and collects mid-range hydrocarbons and some water. The third separator is kept at approximately room temperature for collecting lower end products and a significant amount of water.  All the separation is carried out at the operating pressure. 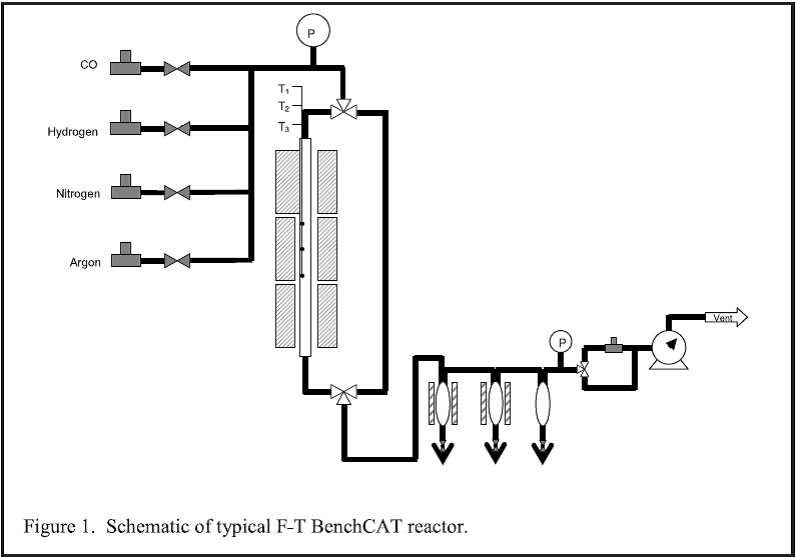 As mentioned, alcohols can be considered a biofuel, albeit one with a reduced energy content. Alcohols are easily produced from any sugar or starch-containing material via fermentation. They can then be converted to more conventional fuels via catalytic condensation processes. For example, a gasoline range product can be obtained by reacting lower chain alcohols over a zeolite, such as ZSM-5². Higher range products can be obtained using base- catalyzed aldol condensation³.

These processes can be conducted in a more-or-less conventional fixed bed reactor. Figure 2 depicts such a reactor that could be used for alcohol condensation. A pump is used to feed the liquid alcohols and both the gas and the liquid feed pass through preheaters prior to entering the reactor. A heat exchanger and gas-liquid separator are in the high pressure zone. Gas products flow out from the top of the separator while the liquid products are withdrawn from the bottom. Level sensing and automatic valves can be used to fully automate the process.

Biofuels can also be produced by trans-esterification of oils or lipids with a simple alcohol such as methanol. This reaction has been reported using various sources of lipids, such as rapeseed oil, soybean oil, used vegetable oil, and algae oil. In a catalytic reaction, the catalyst is a base, typically NaOH.
The reaction can also be carried out in the presence or absence of a catalyst at supercritical conditions⁴.
Bio-oil → Catalytic or Supercritical Reaction with Methanol → Fuel
Figure 3 is a schematic of a reactor that can be used for both catalytic and supercritical esterification of oils.
Figure 4 shows a photograph of the reactor. This particular reactor is rated at 350°C and 350 bar (ca. 5200 psig) or 700°C at room temperature. The higher temperature rating is used to pretreat the catalyst. The tubular reactor is constructed of Inconel metal in order to achieve these dual conditions. Note that in this reactor the pressure reduction occurs before the product collection. 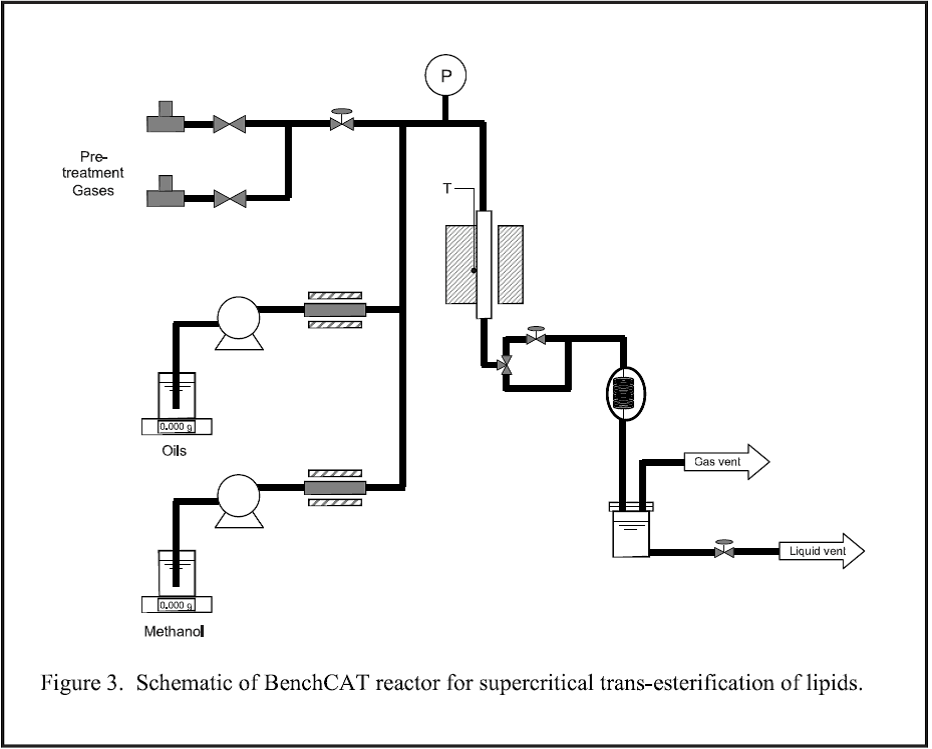 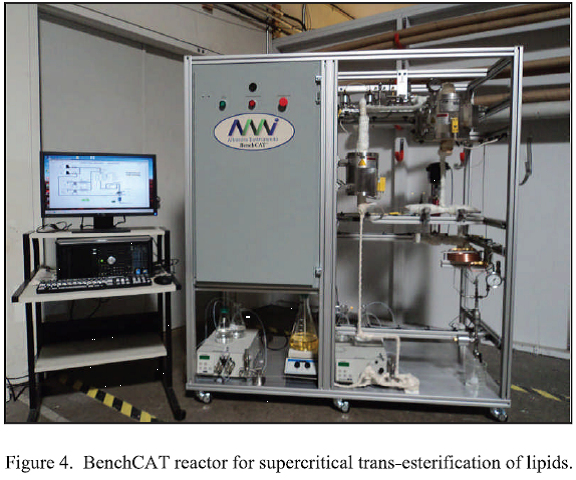 In summary, no matter what your specifications are for automated, research-quality reactors, Altamira Instruments has the technical and scientific expertise to meet your needs. We have extensive experience in the fields of catalytic science, catalyst characterization, and reactions. These descriptions of BenchCAT reactors suitable for biofuel research are one example of this experience.

Combines a variety of temperature-programmed techniques, including, TPD, TPO,TPR, and TPRx.

A complete, bench-top reactor for catalytic studies. All components are either in the gas or liquid phase and are contained in a fully automated compact package.

Custom-designed microreactors, which are fully automated and designed for unattended operation.

Complete this quick form and get access to our notes and studies.